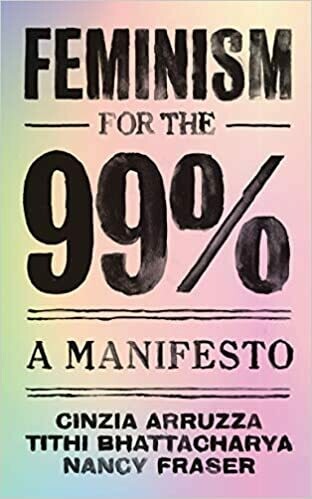 Feminism for the 99%: a manifesto

In the spring of 2018, Facebook COO Sheryl Sandberg told the world that we “would be a lot better off if half of all countries and companies were run by women and half of all homes were run by men,” and that “we shouldn’t be satisfied until we reach that goal.” A leading exponent of corporate feminism, Sandberg had already made a name (and a buck) for herself by urging women managers to “lean in” at the company board- room. As former chief of staff to US Treasury Secretary Larry Summers—the man who deregulated Wall Street—she had no qualms about counseling women that success won through toughness in the business world was the royal road to gender equality.

That same spring, a militant feminist strike shut down Spain. Joined by more than 5 million marchers, organizers of the twenty-four-hour huelga feminista called for “a society free of sexist oppression, exploitation and violence . . . for rebellion and a struggle against the alliance of the patriarchy and capitalism that wants us to be obedient, submissive and quiet.” As the sun set over Madrid and Barcelona, the feminist strikers announced to the world, “On March 8 we cross our arms, interrupt[ing] all productive and reproductive activity,” declaring they would not “accept worse working conditions, nor being paid less than men for the same work.”

These two voices represent opposing paths for the feminist movement. On the one hand, Sandberg and her ilk see feminism as a handmaiden of capitalism. They want a world where the task of managing exploitation in the workplace and oppression in the social whole is shared equally by ruling-class men and women. This is a remarkable vision of equal opportunity domination: one that asks ordinary people, in the name of feminism, to be grateful that it is a woman, not a man, who busts their union, orders a drone to kill their parent, or locks their child in a cage at the border. In sharp contrast to Sandberg’s liberal feminism, the organizers of the huelga feminista insist on ending capitalism: the system that generates the boss, produces national borders, and manufactures the drones that guard them.

Faced with these two visions of feminism, we find ourselves at a fork in the road, and our choice bears extraordinary consequences for humankind. One path leads to a scorched planet where human life is immiserated to the point of unrecognizability, if indeed it remains possible at all. The other points to the sort of world that has always figured centrally in humanity’s most exalted dreams: a just world whose wealth and natural resources are shared by all, and where equality and freedom are premises, not aspirations.

The contrast could not be starker. But what makes the choice pressing for us now is the absence of any viable middle way. We owe the dearth of alternatives to neoliberalism: that exceptionally predatory, financialized form of capitalism that has held sway across the globe for the last forty years. Having poisoned the atmosphere, mocked every pretence of democratic rule, stretched our social capacities to their breaking point, and worsened living conditions generally for the vast majority, this iteration of capitalism has raised the stakes for every social struggle, transforming sober efforts to win modest reforms into pitched battles for survival. Under such conditions, the time for fence-sitting is past, and feminists must take a stand: Will we continue to pursue “equal opportunity domination” while the planet burns? Or will we reimagine gender justice in an anticapitalist form—one that leads beyond the present crisis to a new society?

This manifesto is a brief for the second path, a course we deem both necessary and feasible. An anticapitalist feminism has become thinkable today, in part because the credibility of political elites is collapsing worldwide. The casualties include not only the center-left and center-right parties that promoted neoliberalism—now despised remnants of their former selves—but also their Sandberg- style corporate feminist allies, whose “progressive” veneer has lost its shine. Liberal feminism met its waterloo in the US presidential election of 2016, when the much-ballyhooed candidacy of Hillary Clinton failed to excite women voters. And for good reason: Clinton personified the deepening disconnect between elite women’s ascension to high office and improvements in the lives of the vast majority.

Clinton’s defeat is our wake-up call. Exposing the bankruptcy of liberal feminism, it has created an opening for a challenge to it from the left. In the vacuum produced by liberalism’s decline, we have a chance to build another feminism: a feminism with a different definition of what counts as a feminist issue, a different class orientation, and a different ethos—one that is radical and transformative.

This manifesto is our effort to promote that “other” feminism. We write not to sketch an imagined utopia, but to mark out the road that must be travelled to reach a just society. We aim to explain why feminists should choose the road of feminist strikes, why we must unite with other anticapitalist and antisystemic movements, and why our movement must become a feminism for the 99 percent. Only in this way—by connecting with anti- racists, environmentalists, and labour and migrant rights activists—can feminism rise to the challenge of our times. By decisively rejecting “lean in” dogma and the feminism of the 1 percent, our feminism can become a beacon of hope for everyone else.

What gives us the courage to embark on this project now is the new wave of militant feminist activism. This is not the corporate feminism that has proved so disastrous for working women and is now hemorrhaging credibility; nor is it the “micro- credit feminism” that claims to “empower” women of the global South by lending them tiny sums of money. Rather, what give us hope are the international feminist and women’s strikes of 2017 and 2018. It is these strikes, and the increasingly coordinated movements that are developing around them, that first inspired—and now embody—a feminism for the 99 percent.

Feminism for the 99 percent calls on all radical movements to join together in a common anticapitalist insurgency.

Feminists for the 99 percent do not operate in isolation from other movements of resistance and rebellion. We do not separate ourselves from battles against climate change or exploitation in the work- place; nor do we stand aloof from struggles against institutional racism and dispossession. Those struggles are our struggles, part and parcel of the struggle to dismantle capitalism, without which there can be no end to gender and sexual oppression. The upshot is clear: feminism for the 99 percent must join forces with other anticapitalist movements across the globe—with environmentalist, anti- racist, anti-imperialist, and LGBTQ+ movements and labor unions. We must ally, above all, with left-wing, anticapitalist currents of those movements that also champion the 99 percent.

This path pits us squarely against both of the principal political options that capital now offers. We reject not only reactionary populism but also progressive neoliberalism. In fact, it is by splitting both those alliances that we intend to build our movement. In the case of progressive-neoliberalism, we aim to separate the mass of working-class women, immigrants, and people of color from the lean-in feminists, the meritocratic anti-racists and anti-homophobes, and the corporate-diversity and green-capitalism shills who hijacked their concerns and inflected them in capital-friendly terms. With respect to reactionary populism, we aim to separate working-class communities from the forces promoting militarism, xenophobia, and ethno- nationalism that falsely present themselves as defenders of the “common man,” while promoting plutocracy on the sly. Our strategy is to win over the working-class fractions of both of those pro-capitalist political blocs. In this way, we seek to build an anti-capitalist force that is large and powerful enough to transform society.

Struggle is both an opportunity and a school. It can transform those who participate in it, challenging our prior understandings of ourselves and reshaping our views of the world. Struggle can deepen our comprehension of our own oppression—what causes it, who benefits, and what must be done to overcome it. And further, it can prompt us to reinterpret our interests, reframe our hopes, and expand our sense of what is possible. Finally, the experience of struggle can also induce us to rethink who should count as an ally and who as an enemy. It can broaden the circle of solidarity among the oppressed and sharpen our antagonism to our oppressors.

The operative word here is “can.” Everything depends on our ability to develop a guiding perspective that neither simply celebrates nor brutally obliterates the differences among us. Contra fashionable ideologies of “multiplicity,” the various oppressions we suffer do not form an inchoate, contingent plurality. Although each has its own distinctive forms and characteristics, all are rooted in, and reinforced by, one and the same social system. It is by naming that system as capitalism, and by joining together to fight against it, that we can best overcome the divisions among us that capital cultivates—divisions of culture, race, ethnicity, ability, sexuality, and gender.

But we must understand capitalism in the right way. Contra narrow, old-school understandings, industrial wage labor is not the sum total of the working class; nor is its exploitation the apex of capitalist domination. To insist on its primacy is not to foster, but rather to weaken, class solidarity. In reality, class solidarity is best advanced by reciprocal recognition of the relevant differences among us— our disparate structural situations, experiences, and sufferings; our specific needs, desires, and demands; and the varied organizational forms through which we can best achieve them. In this way, feminism for the 99 percent seeks to overcome familiar, stale oppositions between “identity politics” and “class politics.”

Rejecting the zero-sum framework capitalism constructs for us, feminism for the 99 percent aims to unite existing and future movements into a broad-based global insurgency. Armed with a vision that is at once feminist, anti-racist, and anticapitalist, we pledge to play a major role in shaping our future.

- the above is an edited excerpt from Feminism for the 99% by Cinzia Arruzza, Tithi Bhattacharya, and Nancy Fraser.