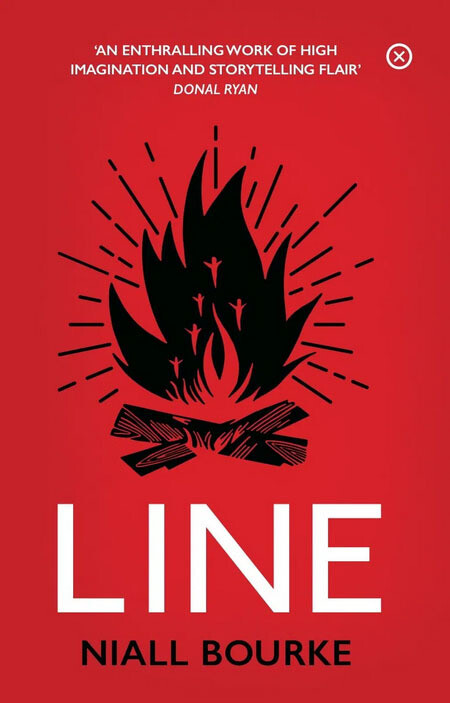 Willard, his mother and his girlfriend Nyla have spent their entire lives in an endless procession, where daily survival is dictated by the ultimate imperative: obey the rules, or lose your place in the Line. Everything changes the day Willard’s mother dies and he finds a book hidden among her few belongings. Line is speculative fiction at its most ambitious, leading the reader on a journey to make sense of a world that is ultimately not so different from our own. A stunning debut from a major new voice in Irish literature.

‘A powerful, discomfiting fable of uncertainty and failure, poetically crafted, politically pointed. From the brass tacks of language we construct to make ourselves feel stable, to the artifice of routine built from obligation, Line is a Ballardian take on the near-now that shows us how fleeting our idea of absoluteness really is.’ – JUNE CALDWELL

‘Line is a modern parable of the most ambitious kind. A Grapes of Wrath for the age of digital capitalism. Niall Bourke writes with passionate urgency and skilful clarity.’ – RÓNÁN HESSION

‘Beautifully written, terrifyingly intelligent, this dystopian novel is shot through with poetry, political nous and a darkly comic sensibility. Queuing up for a loaf of sourdough will never feel quite the same again.’ – HILARY FANNIN

‘This sharply funny and astute novel centres around a line of people so long that generations have born and died hoping to reach the front…fans of dystopian fiction will lap this up.’ –THE IRISH TIMES

‘A high-concept debut about a dystopian queue reads like a lost fiction classic…genuinely reminiscent of Richard Matheson and Philip K Dick…vastly different to anything coming out in the Irish literary landscape.’ – THE SUNDAY TIMES

‘Brilliantly original…a thought-provoking, beautifully written dystopia which stayed with me long after reading it.’ – KIERAN FANNING

‘At once appalling and darkly familiar.’ – THE IRISH INDEPENDENT

‘The hat has to come off to Bourke here…an entertaining and thought-provoking read.’ – HOT PRESS MAGAZINE