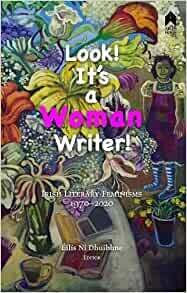 Look! It's a Woman Writer!

Why have women been treated differently, and discriminated against, in the literary world? Why has gender been a ‘problem’ in the writing, publishing, funding and reviewing scene? And why does it matter?

Eilis Ni Dhuibhne asked 21 writers who were born in mid-twentieth-century Ireland, north and south, to write about their literary lives. They tell it like it really was, and is. Collectively, these vivid, original essays provide us with a fascinating picture of Ireland’s literary landscape from multiple female points of view. Poets, fiction writers, playwrights, impresarios, writers in Irish and English, have written accounts which are funny, tragic, philosophical, angry, but all are lively, stunningly-honest testimonies of the writing life during a pivotal period in the history of Irish literature. These writers came of age when legislation for gender equality was beginning to be enacted. They are growing older on an island where a great deal has changed, for the better, as far as women are concerned. They have participated in, and created, new and more egalitarian literary scenes through their activism, but above all with their writing. They were movers and shakers when it really mattered. They are literary survivors.

Contributors: Eilis Ni Dhuibhne, Catherine Dunne, Lia Mills, Medbh McGuckian, Evelyn Conlon, Mary O’Malley, Liz McManus, Mary O'Donnell, Moya Cannon, Celia de Freine, Mary Dorcey, Anne Devlin, Mary Rose Callaghan, Mary Morrissy, Aine Ni Ghlinn, Sophia Hillan, Ruth Carr, Cherry Smyth, Mairide Woods, Ivy Bannister, Phyl Herbert. With a foreword by novelist Martina Devlin and an afterword by Arlen House publisher Alan Hayes, this book is essential reading for anyone with an interest in how Ireland finally began to value the voices of women. Here is, in their own words, the story of the women who are the way-pavers of modern and post-modern Irish literature. There has never been a collection of essays like this.