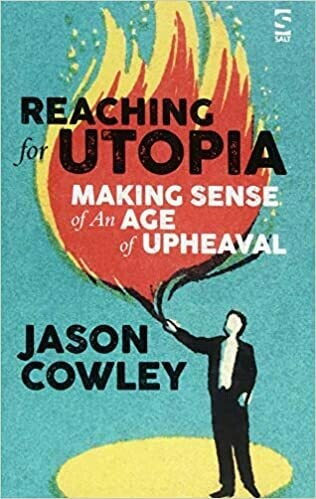 Reaching for Utopia: making sense of an age of upheaval

Reaching for Utopia brings together insightful essays and profiles chronicling the remarkable political and cultural transformations of the last decade – from the fall of Gordon Brown, to the rise of Corbyn and the radical left, to Brexit. Cowley is fascinated by the men and women who are creating the history of our era as well as those who document it. He has met and interviewed nearly all the major political players shaping and changing the way we live today.

The book also features penetrating essays on writers such as George Orwell, John le Carré, Kazuo Insiguro, and Ian McEwan, personal essays, an investigation into the so-called Brexit Murder, and a striking conversation with the political philosopher Michael Sandel.

Cowley is one of the most influential journalists in Britain. He is notable for being both a political and literary journalist. And he also writes about sport, especially football, and covered the 2006 World Cup in Germany for the Observer.

He has been widely credited with transforming the fortunes of the New Statesman, which in 2017 has recorded its highest print circulation for nearly 40 years as well as becoming a major digital title with rapidly growing online profile. According to the European Press Prize, ‘Cowley has succeeded in revitalising the New Statesman and re-establishing its position as an influential political and cultural weekly. He has given the New Statesman an edge and a relevance to current affairs it hasn't had for years.’

In 2017, at the British Society of Magazine Editors awards, Cowley won the editor of the year award (politics and current affairs) for the third time. In 2018, he launched New Statesman America.

Praise for this Book

‘Like the geoscientist who can sense the tremors of a looming earthquake long before anyone else, Jason Cowley has consistently been ahead of the game in sensing, and then tracking, the convulsions that have been shaking Britain. Interested in pretty much everyone and everything, sensitive to the power of myths while never failing to recognise them as myths, fair yet sceptical, he is the model of a journalist.’ —Tom Holland

Reviews of this Book

‘The subtitle for this collection of essays, profiles and interviews by New Statesman editor Jason Cowley is “making sense of an age of upheaval” and largely he succeeds. The section on politics and power is fascinating. Cowley is determined to understand antagonists, to explain the dominant individuals shaping our era. The likes of Arsène Wenger, Tiger Woods, Kazuo Ishiguro and Ian McEwan are explored in the Lives and Letters collection, too, making for a well-rounded collection by a thoughtful and engaging writer.’ —Ben East, The Observer

‘A distinctly superior book … Cowley's thoughtful style is a pleasure to read. He has proved himself the rightful heir of the great Victorians.’ —Simon Heffer, The Telegraph

‘These finely woven and open-minded essays have a dark stream trickling through them: of loss, chances missed, past success fading and no longer giving solace. This elegiac strain of regret, disappointment and intimations of mortality is invoked by, or attributed to, most of the public men and women profiled by Jason Cowley in Reaching for Utopia.’ —John Lloyd, Financial Times

‘In their uncertain but foreboding style, the Jesus and Mary Chain once sang of how heaven is too close to hell. It’s not entirely clear what they were inferring, but it remains an intriguing image. A reading of Jason Cowley’s artful new book might lead us to conclude that utopia and dystopia share a similarly close proximity. Strive for the former and you may well end in the latter. Amongst a range of issues covered in this collection of profiles and essays, it is the unyielding pursuit of an unachievable utopia, an overstretching for something better, that is set as the frame. It is here that some understanding of our present malaise might be found in the fragments of recent history.’ —David Beer, Berfrois

‘The strength of this outstanding essay collection lies in Cowley’s access to the key players in British politics, his considerable powers of social and political analysis and his excellent prose style.’ —David Patrikarakos, Prospect Magazine