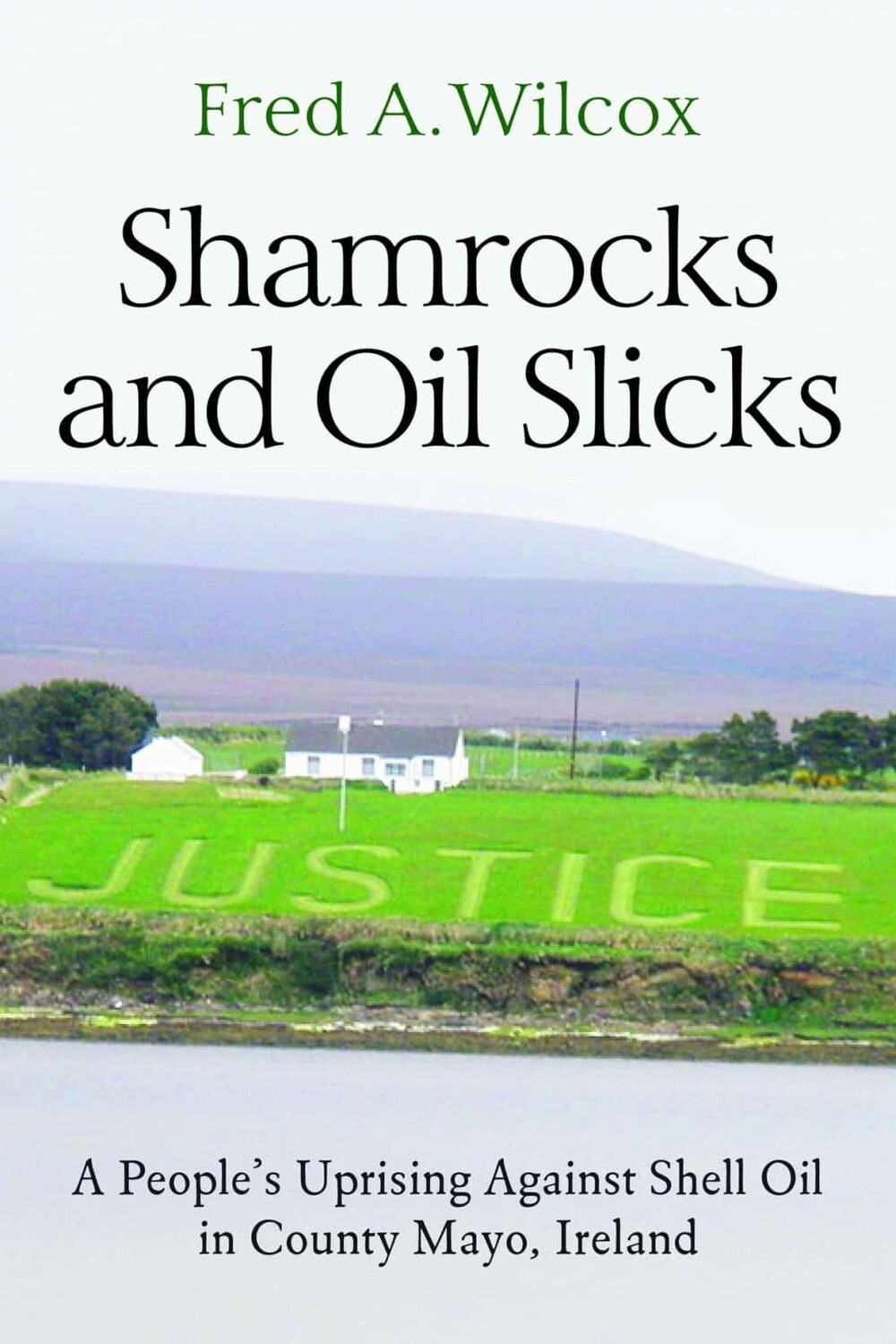 County Mayo, Ireland, is spectacularly beautiful. Dolphins, whales, and seals frolic in bays, rivers teem with salmon. Into this tranquil, unspoiled region, in early 2002, came Shell Oil, announcing plans to build a gas refinery. Shell promised wonderful things: new jobs, improved roads, money for schools. Church officials called this project a “godsend,” while honest, hard-working families, who had lived in Mayo for generations, certainly saw no harm in the project. But when the citizens of County Mayo realized what Shell actually intended to do, they rose up. Shamrocks & Oil Slicks tells the story of County Mayo—the fishermen, farmers, teachers, business people—who, motivated by love for their environment, their community, and their country, fought one of the planet’s most powerful destroyers to a standstill.

To combat the pipelines that Shell planned to build dangerously close to their homes and the toxic chemicals Shell wanted to dump into their drinking water and their bay rich in sea life, the people launched a nonviolent resistance movement that was to last some fifteen years. Residents from all walks of life were beaten by police, threatened by mercenaries, sent to jail and prison. Abandoned by the state and their church, insulted and maligned by the media, they refused to give up fighting to save their environment and their heritage. This is a story of the courage inherent in everyday folk, told with sweeping and lyrical sincerity. It is one of many stories taking place now throughout the world, wherever people struggle to preserve what’s left of their natural world. More people are joining this resistance every day, inspired by uprisings like the one in County Mayo, Ireland.

Fast-paced and inspiring, Shamrocks and Oil Slicks chronicles the well-honed, divide-and-conquer tactics of one of the most powerful fossil-fuel companies on earth, as it splits up families while recruiting politicians, clergy, journalists, and cops as corporate allies. Some are bought off, others propagandized or “just following orders.” But the “stars” of the book are the ordinary citizens who become extraordinary activists—surviving jail, police violence, job loss, and ostracism to sustain a fifteen-year struggle. Naomi Klein would call them “heroes of Blockadia”; the Standing Rock Sioux call them “water protectors.” The story is set in Ireland’s County Mayo, but it could be coming to a community near you.

Shamrocks and Oil Slicks is a moving and important story of resistance by human beings who love their home, against the power of the corporate/government interlock. Simultaneously, it is a model for, and call to, precisely the sort of action we need to defend life on this planet from the depredations of capitalism.

We all owe Fred Wilcox a gigantic thank you. He has provided us just what we need in this moment: a reminder of the power of people coming together, standing up to a powerful fossil fuel corporation, and fighting with everything they have, because what is at stake is everything they love. Shamrocks & Oil Slicks is an inspiring tale for all of us fighting against the odds for a better future.

—Annie Leonard, Director, Greenpeace US; author, The Story of Stuff

In Shamrocks and Oil Slicks, Mr. Wilcox has crafted a poignant and powerful tale of one determined community’s fight against greedy corporate polluters and their craven government enablers. This story is a critical one, as it can and should be used to inform and inspire the activism of all those waging similar fights against fossil fuel calamity throughout the world today.

—Wenonah Hauter, executive director of Food & Water Watch; author, Frackopoly: The Battle for the Future of Energy and the Environment

Fred A. Wilcox is a writer, teacher, veterans’ advocate, and peace activist. He has devoted his life to chronicling the effects of chemical warfare in Vietnam, and to exposing the government’s criminality in all of its many forms. He is the author of several books, including Waiting for an Army to Die: The Tragedy of Agent Orange and Scorched Earth: Legacies of Chemical Warfare in Vietnam.