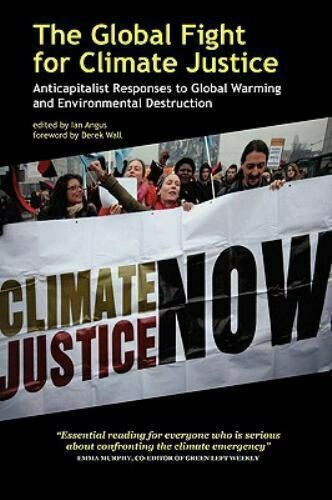 As capitalism continues with business as usual, climate change is fast expanding the gap between rich and poor between and within nations, and imposing unparalleled suffering on those least able to protect themselves. In THE GLOBAL FIGHT FOR CLIMATE JUSTICE, anticapitalist activists from five continents offer radical answers to the most important questions of our time: Why is capitalism destroying the conditions that make life on Earth possible? How can we stop the destruction before it is too late?

In 46 essays on topics ranging from the food crisis to carbon trading to perspectives from indigenous peoples, they make a compelling case that saving the world from climate catastrophe will require much more than tinkering with technology or taxes. Only radical social change can prevent irreversible damage to the earth and civilization.

"Essential reading for everyone who is serious about confronting the climate emergency." -Emma Murphy, co-editor, Green Left Weekly

EDITED BY IAN ANGUS Ian Angus, who wrote several of the articles in this book and selected the others from a wide range of authors and movements, is one of the world's best-known ecosocialist activists. He is editor of the online journal Climate and Capitalism, which has been described as "the most reliable single source of information and strategic insights for climate justice." Ian is also Associate Editor of Socialist Voice, an Advisory Editor of Socialist Resistance, and a founding member of the Ecosocialist International Network. He lives in Ontario, Canada.

"At last, an absolutely indispensable guide to the debate on climate change, a sourcebook that makes the case for anti-capitalist action as the only effective way to stop global warming. Of course the powers-that-be don't agree - after all, who else is responsible for the current crisis? But we all need The Global Fight for Climate Justice if we are to fight for a liveable world." -Joel Kovel, author of The Enemy of Nature; founding member of the Ecosocialist International Network

"A wonderful collection of articles from across the world by climate change activists, from governmental leaders such as Evo Morales to trade unionists like Tony Kearns. This book will inform, excite and energise those who see the need to fight both the impact of climate change and the political systems that have produced it." -Jane Kelly, editor (with Sheila Malone) of Ecosocialism or Barbarism

"Everyone who wants a better world should read The Global Fight for Climate Change, to understand the economic, social and political causes of the climate crisis, and the sweeping changes that are needed to save the Earth." -Suzanne Weiss, Socialist Voice contributing editor; author of Anti-Semitism, Zionism, and the Defense of Palestinian Rights

"'Socialism or Barbarism' is no longer (if it ever was) an abstract theoretical proposition. This comprehensive collection of essays focused upon the climate and food crises, the responses of capital and socialist alternatives, draws upon both global social movements and leading advocates of an alternative to barbarism to demonstrate that the choice before us is an immediate one, not one to be put off to the future." -Michael A. Lebowitz, author of Build it Now: Socialism for the 21st Century and Beyond Capital: Marx's Political Economy of the Working Class

"The most reliable single source of information and strategic insights for climate justice is Climate and Capitalism, the website Ian Angus edits, and it is a tribute to the movement's development that demand has arisen for this book." -Patrick Bond, director of the Centre for Civil Society, University of KwaZulu-Natal, South Africa